Doctor Sleep shines as a sequel 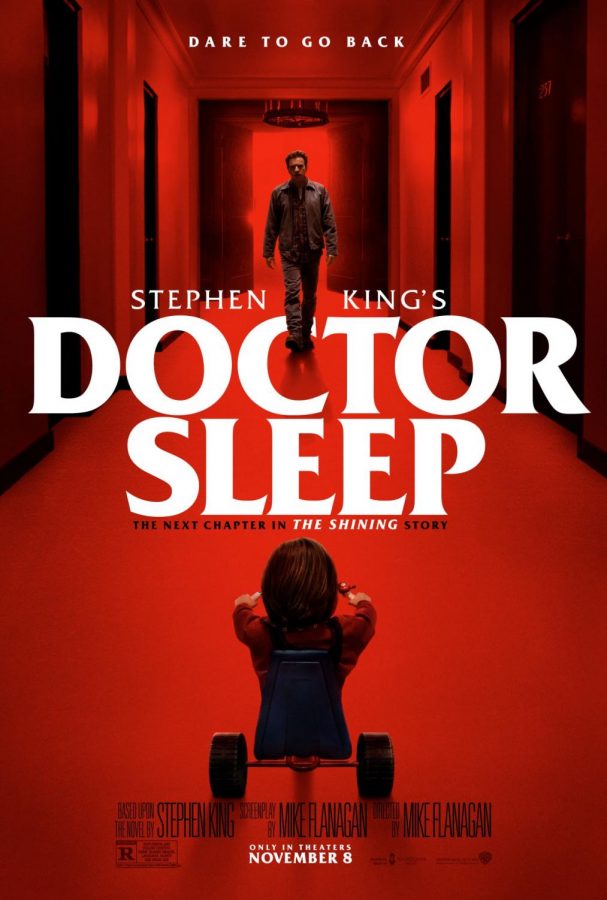 The world of horror films has its own unique characters from other genres. That feeling of unease and terror seeps into the audience as they continue to delve into what happens next to the ill-fated characters on screen. However, like with other genres, horror film sequels can either hit or miss the mark in reviving their beginnings. But this year, one particular sequel caught the eyes of diehards of one very famous horror film, and it did not disappoint.

Director Mike Flanagan’s “Doctor Sleep”, which was released on Nov 8, follows the horrific storyline of the 1980 film “The Shining”. This film adaptation now brings both of Stephen King’s novels to life, as just like the novel sequel, it came out nearly 40 years later. Of course, fans of “The Shining” were curious as to how it would fare in the horror film world, and if it would be as successful as its origins.

The film revolves around the aftermath of “The Shining”, where Wendy Torrance, played by Alexandra Essoe (in the 2019 version), and her son, Danny, played by Roger Dale Floyd (in the 2019 version), are recovering from the trauma they experienced at the Overlook Hotel. Already, the atmosphere grows cold and grim as the movie starts with Danny still as a young boy, immediately bringing the audience into a soon-to-be jaw dropping experience.

Now, Danny is an adult, played by Ewan McGregor, and it is clear that things are not going so smoothly for him. Similar to his father, Jack, he is an alcoholic, and besides using it as an escape from his awful life, it is also a way for him to suppress his powers because he believes it is dangerous to make them known.

The viewpoint shifts to a girl named Abra Stone, played by Kyliegh Curran. She also has what is called “the shining”, but her powers are very strong. At this point, this sudden change in the story might have thrown the audience off while they wonder how she relates to Danny, but the film does an amazing job to bring this together with a new enemy.

Most of the time, scary movie villains may not seem as scary as they look, but watch out, because this one sucks the life out of people. The story introduces the True Knot, a cult of evil and darkness. Led by Rose the Hat, played by Rebecca Ferguson, this group is one of the many who feed off of people with “the shining”, specifically their steam, (made from their victims’ fear and pain), which is the essence they need to survive for a long time.

The major point of “Doctor Sleep” would have to be the presence of Overlook Hotel making its way back on the screen yet again for a final showdown. References, such as the “murder” writing, the flood of blood, and Room 237, come once more to act as bait for the two to capture Rose the Hat. Reminiscent feelings mixed with terror create the perfect atmosphere with this infamous location. The ending is special and brings a sense of peace, but you’ll have to watch the movie to find out the rest.

“Doctor Sleep” brought “The Shining” back in an extraordinary way, but there will always be issues surrounding it. When it comes to accuracy, it is already known that “The Shining” strayed from King’s intentions. For example, in the novel, the outside maze chase was not the final interaction between Jack and Danny as shown in the movie, and the Overlook Hotel burned down.

Similar to these mishaps, the book sequel meant for the Overlook Hotel’s location to turn into the True Knot’s campsite, since it was destroyed in the last book. So, the movie alters the settings of what truly happened in the books, which is upsetting. Not staying true to what King wrote can be seen as a problem, since the settings were of important locations, and the actual interactions between the characters are significantly different in both the movies and novels.

Regardless, film adaptations of well-known books almost always have trouble with keeping everything the same, but with this case, “Doctor Sleep” is still a hit. For starters, the “shining” abilities were not overdone, which is fantastic because the magical aspects of a movie can ruin a film with over usage, but here, it was interesting to see how Danny’s powers developed after years. Also, the addition of a girl who isn’t a coward and can hold her own in a psychic fight brings that childlike wonder rather than an annoying add-on to character development.

Every scene increased the interest level with a perfect blend of mystery and tension. It was able to capture that essence of the internal battle of light and dark through the artistic form of “shining”, which allows the audience to see the actual fight with a deeper meaning and relate to it more. The fact that it is the sequel to such a popular horror film made audiences excited to see what Danny’s future would be like after such a long time, especially since McGregor is an actor known for his amazing talent.

Overall, “Doctor Sleep” is not just a worthwhile watch, but it sets the stage beautifully for another terror-filled experience to follow “The Shining”. Contrary to its title, it did not make the audience sleep, since this film stands out from the boring horror films that overuse the same plot. With all the hype from this anticipated sequel, there’s no doubt that it will be another horror favorite to keep forever…and ever…and ever.